Lest We Forget - a Buxton Fringe premiere

Aulos Productions have become regulars at Buxton Fringe and their shows are always keenly anticipated by out audiences. James Beagon from Aulos took up our offer to answer questions about their Fringe 2016 show which is being performed at Underground Venues on 14, 15 & 17 July. 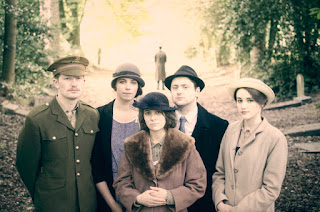 1] Lest We Forget is about the aftermath and the effects of the First World War. When you started writing it did you ever have a sense that there was nothing more to say about the War - or turning the question around what did you want to say that would seem fresh?

It was pointed out to me a couple of years ago that nobody really questions what happened after the First World War. In schools, pupils only tend to learn about the Treaty of Versailles and then the so-called Interwar period, usually within the context of "The Road to Hitler" and so forth. Nobody ever asks how they cleaned up the battlefields of WW1; nobody really wants to consider the nasty details.

Similarly, nobody questions why we have the cemeteries and memorials that we know and visit today either. We just assume it was a foregone conclusion - most people consider them to be respectful and therefore a natural by-product of the war. Yet in 1920 it was anything but a foregone conclusion that they would happen, with a fierce parliamentary debate (and indeed, a national debate) on the subject in May that year.

The closest thing a 21st century person has to relating to this idea is that famous line from Alan Bennett's play "The History Boys", where the boy's controversial and cynical young teacher cryptically suggests that the words on the memorials should not read 'Lest We Forget' but instead 'Lest We Remember'; he suggests that the appearance of clean stone memorials is there to hide the dirt about what really happened and where blame for the conflict truly fell. But even that falls far from the tree. The opposition to the memorials was not based on cynicism, but on a passionate belief that the government were essentially stealing the bodies of their sons. On the other hand, support for the memorials were fuelled by an odd alliance of those with patriotism for the British Empire and yet surprisingly liberal views on the equality of the fallen men.

Suffice to say, the debate was not nearly as clear-cut as modern audiences might consider it to have been. Therefore, we felt there was new ground to be broken by exploring the stories of how these memorials came to be through the lens of a single family, and what sort of new ideological battles were unpleasantly fought as a result.

2] Without giving too much away do you want to tell us something about the new play and what you are looking to achieve?

Lest We Forget focuses on the story of the Ashwood family. It's 1920 and Edith Ashwood is at loggerheads with the Imperial War Graves Commission about their refusal to return the body of her son, Harry, to her from the battleground of the Somme. The five characters in the play have very different perspectives and memories of Harry, and gradually we come to see how both he and the war influenced their lives differently in turn.

When writing the play, I wanted to challenge both of the assumptions I mentioned before, the respectful and the cynical. By highlighting one family's struggle to bury their son where they want to, we hope to show that history is never a foregone conclusion. It's not about whether the war was a bad thing, a tragic thing or even a good thing, which is so often the subject of our post-war literature. It's about how it shaped and influenced society in the years immediately after it, how it influences OUR modern society and how the debates it provoked about conflict and remembrance are still as relevant today as they ever were.

3] Aulos has a strong reputation and its work is keenly anticipated. Do you have a sense of that? Do you worry about letting people down?

Constantly! But I think I'd still feel like that even if we didn't have a reputation for our previous work. If anything, that reputation is quite encouraging. It shows that audiences are engaging with our style and also our choice of topics which aren't always the most mainstream of subjects. It makes us more confident that people will always find ways to connect with our work whatever it may be, regardless of how obscure our subject matter is.

4] Is there an "Aulos Productions" style? Looking back over your work are there themes or methods that are in the DNA?

Some might say that we're a bit grim and depressing at times! But I think also we do strive to find some measure of hope in things as well. I'm an ancient historian myself and thus all of the plays I've done with Aulos have had some sort of historical or mythical link. But I'd say our true style is something which is focused primarily on character. That's certainly something we emphasise with our rehearsal process, where we will spend a lot of time doing short and long-form improvisation as well as generally devising new ideas about the characters before we engage in script-work.

I like to think of it as having an ultimate emphasis on personal histories, not just traditional history, and particularly histories or perspectives that don't often get much popular representation. 'First Class' started off that trend with its split monologue style across the three different time periods and then 'Women of the Mourning Fields' was all about telling the stories of real women misrepresented by history.

'Lest We Forget' in turn deals with a fictional family but in the midst of a historical event which many may not be familiar with. Therefore an introduction to this family also conveniently serves as an introduction to the question at hand. Whatever the answer to that question may be is however entirely up to you; we're just serving up additional sympathetic perspectives for your consideration.

5] You are performing in the 40-seat Pauper's Pit. This really will be the last year for the Pit and so the final time you get to put a show on there. Any memories of the Pit you'd like to share?

It's been great performing in the space for the past 2 years. Personally, I've still got my fingers crossed that it won't truly be the end once more, but I know that's unlikely.

I think my best memory of the Pauper's Pit was the reaction we got after the first performance of 'First Class', which went down really well. Our first performance in Buxton is always our first anywhere in the world for our Fringe shows, so up until that point, we really had no idea whether people would like it or not.

Also, the reactions of my successive technical operators to seeing the little tech cubby-hole and the swing-around lighting desk for the first time has always been consistently funny!

If you want to talk to us about your Fringe 2016 show write to: entries@buxtonfringe.org.uk and we'll set it up.