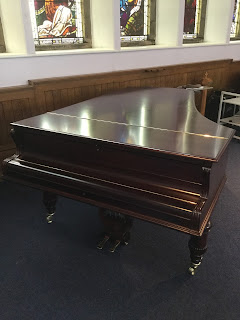 It is less than 3 months to the start of the next Buxton Festival and Fringe. Last Sunday it snowed heavily across the Peak District, today it almost feels like Spring. The notion of Summer may seem fanciful but let’s trust to forces more powerful and reliable than we are.
One of the last events of Fringe 2017 took place at Buxton’s United Reformed Church when Marianne Kelly and Heather Sargeson played a stunning piano duet recital. The URC piano is a Broadwood grand and dates back to 1899. The instrument is a fine one but was in need of refurbishment. Thanks to a generous grant from Bingham Trust the piano has now been completely restored and is back in the Church.
To celebrate this exciting development Marianne and Heather are returning to the URC on Saturday 14th April to give the first public performance on the restored piano. Their programme includes arrangements of Saint -Saens’ Carnival of the Animals, Gershwin’s Rhapsody in Blue and Vaughan Williams’ Fantasia on Greensleeves. The recital starts at 7.30pm and tickets will be available on the door (£10, £8 concessions, £5 children). It will surely be a happy and exciting occasion and we look forward to seeing many of you there. It will also be a first chance to collect your new Fringe badge!
Other events using the Broadwood are scheduled for later in the year and will be announced soon.
The 39th Buxton Festival Fringe begins on Wednesday July 4th. Already over 140 different events are listed on our website and we expect another 30 or so to be registered in the next 8 days when we reach our final deadline. Our three ‘managed’ venues - The Green Man Gallery, The Rotunda and Underground Venues  - have strong programmes announced already and will be finalising their schedules in the next week.
If you are looking to put on a show this July and have yet to negotiate a venue then we can tell you that the Rotunda currently has some weekday afternoon slots at very reasonable rates. If you are interested contact info@rotundatheatre.com soon. 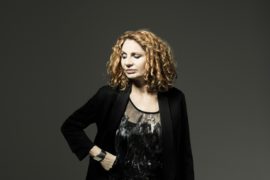