Fringe 2015 - What was your favourite moment?

Another year over but what a great Fringe and what fantastic memories! Thanks to all who made it such a wonderful event, from the many volunteers to all the tireless Fringe entrants and not forgetting the enthusiastic audiences who attended some 170 events – that’s around 600 individual performances!

We really did think the quality was excellent overall and the town seemed even more buzzing than usual with all our venues looking very Fringey and welcoming. I’ve seen some great shows but here are some of the special moments that particularly stick in my mind:

-         Dancing in Poole’s Cavern with the cast of As You Like It
-         Making a TINY pirate in the Pavilion Gardens
-         Seeing an elephant emerge onto the stage in Around the World in 80 Days
-         Being picked as Clive Sinclair’s ‘love interest’ in Together in Electric Dreams
-         Waving to all our Fringe supporters from the carnival float (next best thing to being a royal…)
-         Hearing what the arts meant to residents at The Portland Nursing Home
-         Finding about a dozen different friends to talk to one night in the Fringe Club
-         Singing in the Kaleidoscope choir and our most complicated song actually coming out right!


Posted by Marketing Officer at 16:32 No comments:

The Fringe is very grateful to local media including PureBuxton, Artsbeat, The Buxton Advertiser, Arts Derbyshire, Made in Derbyshire, BBC Radio Derby and High Peak Radio for helping to give performers masses of coverage and we were pleased to have a mention on BBC’s North West Tonight recently, but as our festival grows we’ve noticed that we are getting highlighted on national media as well.

Petroc Trelawny mentioned the Fringe and Amaretti Chamber Orchestra on his morning show on Radio 3 last Thursday http://www.bbc.co.uk/programmes/b061fs2r#play while opera critic Geoff Brown also referred to the Fringe in The Spectator last week. The Fringe was also celebrated as part of Radio 4’s coverage of a Festival Mass at St John’s yesterday: http://www.bbc.co.uk/programmes/b062hn6s

Do let us know if you have heard the Fringe being referenced in other national papers, radio or TV – not to mention the international coverage we receive from World Fringe! Onwards and upwards!


Posted by Marketing Officer at 13:08 No comments:


Having just enjoyed an almond slice at the one-off Vintage Café run by the Past Lives Project today, we got to wondering whether there were other opportunities to combine Fringe and cake. Here are some options...


Exceedingly good ideas we think you'll agree! Find details of all these shows and more.


Posted by Marketing Officer at 17:29 No comments:

The Magic of Theatre at Buxton Fringe

Whether it is through the story itself, the unique location in which it is performed, or the sheer quality of the performance, this year Fringe theatre is set to take audiences into another world.

The magic begins with Butterfly’s adaptation of As You Like It, uniquely set in Poole’s Cavern where live acoustic music, love and laughter help create a lively “Shakespeare lock-in” as the audience moves through the atmospheric caves. The enchantment continues with The Ash Girl, Timberlake Wertenbaker’s darkly beautiful retelling of Cinderella performed by the REC Youth Theatre Company, and don’t miss the most charmed play of all, Uproot Theatre Company’s A Midsummer Night’s Dream, performed in just one frenetic hour by two actors.

Shakespeare continues to gain a magical twist with inamoment theatre company presenting King Lear (Alone), a thought-provoking reworking of the original, whilst Fringe Award winners, Smooth Faced Gentlemen are bringing a new, all-female production of Othello, plus their stripped-down, ramped-up version of Titus Andronicus. Steve Larkin, also adapts a classic with, Tes - Tess of the D’urbervilles Re-imagined, reinventing Hardy’s heroine as a teenaged boy from a Newcastle council estate.

A more spooky atmosphere is also to be found, with The Rats in the Walls by Alexander Arts taking us to sinister Exham Priory, and Peaceful from The Off-Off-Off- Broadway Company focusing on a woman hiding from ghosts in her labyrinthine mansion. Both of these shows are performed in the distinctive setting of Underground Venues, also the place to see the classic gothic horror story The Turn of the Screw performed by That’s My Cue Productions.

Action and adventure is also delivered with Curious Grin Productions offering an energetic and exciting production of Around the World in 80 Days. Rhema Theatre Company meanwhile tells powerfully dramatic true stories from the world of human trafficking in The ‘It’s Not Fair!’.

The magic of musical theatre is also very present in this year’s Fringe. Far West Theatre presents Jacques Brel: Une Vie a Mille Temps, a brand-new musical piece based on the life and works of the famous Belgian composer, whilst Departure Lounge, a musical by Sudden Impulse Theatre company, tells a more modern story, about four British boys returning home from a lads’ holiday in the sun. Behind the Blinds by Dreamshed Theatre invites us to a musical revue featuring comic and tragicomic songs, whilst Jim MacCool’s Parliament of Fowls, by the Performance Poetry Society, combines poetry and music in a magical combination, with a brand new version of Geoffrey Chaucer’s parable dream vision.

Sometimes all it takes is just two actors to bring a play magically to life. Seriously Funny by Dreamshed Theatre, portrays Tony Hancock and Kenneth Williams both on and off stage, whilst Sudden Impulse Theatre Company, brings to life Two by Jim Cartwright, just as the writer originally intended.


Who's bringing magic to your Fringe? Do add your comments about shows via the website's Enhanced Diary or in the Comments Book at the Fringe Information Desk.


Posted by Marketing Officer at 15:20 No comments:

Why the Fringe gets Buxton buzzing 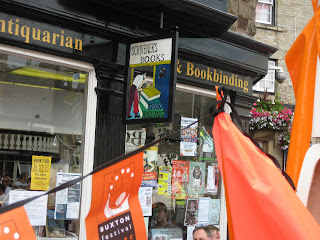 Festivals have a habit of bringing people together. Just take a look at the following article about Sidmouth Folk Week.

Here in Buxton, though we are also proud of the economic benefits brought to the town by both the Fringe and the Festival, we are probably even more excited by the feeling of community and fun engendered by our event. "I love what happens to Buxton during the Fringe - I enjoy seeing the colourful thespians, artists and musicians in town and the energy shift is palpable. Buxton feels hip!" said Buxton Tennis Club’s Fiona Holland in a recent issue of Pure Buxton and we get plenty more comments like that from enthusiastic visitors to our Fringe Information Desk, which opens this Wednesday.

Our Community Links scheme also tries to make the buzz reach as far as possible. So we help performers contact care homes, schools and other organisations with a view to bringing them shows and workshops. And the Fringe itself sometimes gets involved with community projects. Last week I joined Haddon Hall Care Home residents in making a colourful wall display about the Fringe and look forward to bringing you some pictures of this when it is finished. This week I’ll be involved in a similar activity session at the Portland Care Home.

Every year we are delighted afresh with the support we get in the town – we know plenty of places such as Buxton Community School mount their own Fringe displays and shops are enthusiastically displaying performers’ posters. Thank you shops, thank you venues, thank you volunteers and thanks to all who help turn Buxton orange during the Fringe every July.


Posted by Marketing Officer at 13:33 No comments:

We think that this year is the 21st consecutive Buxton Fringe for the early music ensemble Partita. This is what they have told us about the two concerts they bring for 2015.

"The music of the medieval, renaissance and baroque periods ranges from
extremely simple expressions of reflective beauty and calm or lively charm to
astonishingly complex blends of musical inventiveness and affecting emotional power.

"Partita invites you to join us in experiencing the delights this music
has to offer in two different concerts this year – featuring singers Sasha
Johnson Manning and Holly Marland, whose voices have been described as
“remarkable voices with clear tone, no vibrato, precise diction, beautiful line,
and an air of total engagement with the music and the audience” and
instrumentalists who play a fascinating range of faithful historic copy
instruments including lutes, viols, harps, harpsichord, renaissance and
baroque guitars, vihuela, theorbo, gemshorn, and recorders.

"Partita’s second Fringe concert  -  a lunchtime concert in Buxton Methodist
Church (23 July 1pm)  will be a sequence of our traditional renaissance/
baroque mixture of voices and instruments and will include music from the
Elizabethan theatre, a favourite song of the Holy Roman Emperor Charles V, a
song set to words by Francois I of France, a baroque partita for two bass viols, and songs and arias by Purcell, Handel, and Bach.

For a preview of the sounds of Partita and Stringboxes visit: