With Fringe Towers shrouded in cloud and rain it is time to take stock of a (mostly) sunny Fringe and all our happy memories.

I've just been updating our Community Links page and it has been a great year for reaching out to people. To give you just a flavour: we supported a Rossendale Trust work experience placement which meant that Fringe fan Barry Haynes (pictured) was able to help us in some valuable Fringe work. Meanwhile musician Paul Cromford told us all about his life-changing experiences with Fairfield school children. Residents at Haddon Care Home helped us create a fantastic Fringe40 wall display on London Road and Buxton Art Trail brought some of the trail's artworks into the home for people who otherwise would not have been able to see them. Bringing the Fringe out of the centre of town, the beautifully decorated Working Men's Club really took off as a venue and has been praised in some of our audience feedback.

Over the summer we will be updating the gallery pages on the website so we can relive a fantastic July. We will be gathering all our stats and feedback so if you haven't yet filled in your audience survey form please do so soon before we disable the link.

In his last season as Fringe chair, Keith Savage told us that outside his family the Fringe was the most important thing he had done. We are hugely grateful to him for all his hard work over the last six years.

We are so thankful to everyone who supports the Fringe - committee members, volunteers, Desk staff, venues, tireless reviewers, our sponsor the University of Derby, financial supporters, the Opera House, Buxton International Festival and everyone who gets behind us. But most of all - thank you Fringe performers! Napping under the stars in the name of art, meeting a dinosaur sculpture in a domestic garden, shedding a tear at a teenaged girl's acknowledgement of the specialness of her "crap little family", bopping on the Fringe float, basking in a one-man performance so real that audience members thought there really was a retired policeman on stage, enjoying a singalong among the free flowers and veg at the Serpentine Community Farm... These are just a few of my Fringe40 highlights.

We will be starting all over again in September and look forward to bringing the arts to even more people in the town and beyond!

Our Fringe family and other Animals


Thanks to everyone who helped make such a success of our first joint Buxton Festival Fringe and Buxton International Festival carnival float - particularly Lomas Distribution and driver Dominic.

We were delighted to win first prize in our category with our Carnival of the Animals themed float. Workshops carried out by Babbling Vagabonds in schools meant that the spectacular float was adorned with animal puppets and a giant, movable lion's head and huge animal sculptures were paraded in front of the vehicle.

Fringe performers added to the fun as did members of the Fringe and Festival behind-the-scenes crews. Even the sun shone!

In the coming weeks we will be updating our Fringe website gallery pages so look out for some great pics. Thanks to Fringe40 photographer Ian Parkes for helping with this!

Looking forward now to the Award ceremony at The Green Man Gallery this Sunday from 1.30pm. Do join us and raise a glass to Fringe40 and all its performers!


Posted by Marketing Officer at 11:47 No comments: 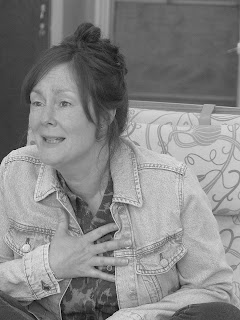 Sara Gray - as Shirley
High Peak theatre group return to Buxton Fringe with powerful drama
High Peak theatre group, Easy Company, are returning to the Buxton stage this July after a long absence.
Robbie Carnegie and Sara Gray, together with work colleague Sian Dudley, formed Easy Company in 2011. That year, they performed together in a double-bill of plays by Amy Rosenthal: Lifelines (starring Robbie and Sara, and directed by Sian) and Henna Night (starring Sara and Sian, and directed by Robbie).
‘We had a great time doing the double-bill,’ says Robbie, ‘but in its aftermath, life seemed to get in the way, and it’s taken us 8 years to come up with a follow-up!’ Sian left the area for pastures new, but Sara and Robbie continued to work together onstage. ‘Robbie directed me in The Winter’s Tale, and we played opposite each other in Breaking the Code, both for Buxton Drama League,’ Sara adds. ‘The main problem was finding an opportunity to stage a Fringe-type play,’ explains Robbie. ‘For the last 6 years, I’ve been working for Buxton International Festival, so was unable to commit myself to anything else in July.’ ‘But the idea of Easy Company never went away,’ continues Sara, ‘so when Robbie changed jobs early this year, we decided the time was right to revive Easy Company and put on a play at the Buxton Fringe.’
The play is Jordan, by Anna Reynolds with Moira Buffini, a moving, powerful one-woman drama, based on a true story. Sara plays Shirley, on trial for the murder of her child, looking back on the awful circumstances that drove her to this terrible act, and she is embracing the enormous challenge of this role, ‘There’s a great responsibility in playing a real person and it’s a very hard-hitting play, which certainly puts me as an actress through the wringer! But I know audiences will be moved and sympathetic to Shirley’s plight.’ Robbie, who is directing the play, adds, ‘Luckily the play is not without its humorous moments, and it’s been my task to help Sara bring out the light and shade in the piece.’
Sara sums up the experience, ‘We called ourselves Easy Company, because that’s how we see ourselves – friends who enjoy spending time together and who share a passion for putting on good theatre. We’re looking forward to being back in the Arts Centre Studio, performing to Buxton audiences again.’


Jordan will be performed at Underground at the Arts Centre on Friday 12, Friday 19 and Sunday 21 July at 7.15pm. For tickets go to underthefringe.com or visit the Box Office at the Old Clubhouse.

Once Upon A Time In Trieste

Buxton theatre company to perform for senior Slovenian diplomat during Fringe run
Diplomat Miha Fatur from the Slovenian Embassy in London will attend a performance of Once Upon A Time In Trieste, a new play presented by Buxton’s Silver Pine Productions.
The hero of the play, Pinko, an ethnic Slovenian living in the Italian city of Trieste in 1938, is suffering under the Fascist Government’s anti-racial laws. He plans to assassinate Mussolini when the leader makes an official visit to the city.
Silver Pine writer and producer Anna Girolami, who lives in Harpur Hill, said: “I contacted the Embassy with details of our play hoping that it might be of interest to their network of Slovenian community groups around the country. When the Embassy replied and said that Mr Fatur would be coming in person to attend a performance, I was absolutely delighted. The whole team is terrifically excited about his visit - it’s the icing on the cake for our Fringe run.”
Mr Fatur is attending one of the team’s Manchester performances at Hope Aria Academy in Ancoats. Buxton audiences can see the piece at The Green Man Gallery on 14th and 15th July. All details are on Silver Pine’s website and social media pages.
Website: www.silverpineproductions.com