The Edinburgh Festival Fringe began in 1947 when eight groups arrived in Edinburgh hoping to perform at the newly formed Edinburgh International Festival but were refused entry to the programme. Rather than being discouraged from performing, they went ahead and performed on the fringe of the Festival anyway. The Edinburgh Festival Fringe is an open access festival where, in the spirit of the original eight, no one is denied entry, making it the largest platform on earth for creative freedom. In 2016, 3,269 shows took place in 294 venues across Edinburgh.
For more information about the day visit www.worldfringeday.com.

Posted by Buxton Fringe at 16:45 No comments: 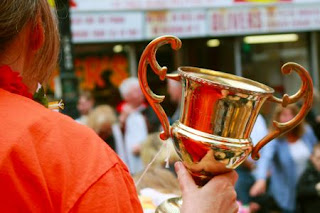 The cup the Fringe float was awarded at the 2016 carnival!
[Photo. Sofia Huxford Rodriguez]

This year will be the 38th Buxton Festival Fringe - and it is going to be the biggest yet! When the deadline for entries was reached on Sunday we had 185 different shows and events listed - with well over 500 performances to take place over the 19 days from 5-23 July.

Now size isn't everything, but the quality and range of art and entertainment on offer in Buxton this summer is better than ever too. With little over 70 days to go we shall struggle to preview all that is on offer but we'll be broadcasting all the news that entrants send to us and alerting you to as much as we can.

At the close of Fringe 2016 and the loss of two venues in the Old Hall Hotel we wondered what might happen to make up for those losses. Well, now we know. Underground Venues is back - now Underground at The Old Clubhouse - with nearly 70 shows in the pub opposite the Opera House. The room upstairs will be converted into a 60-seat theatre space for the Fringe and in another, smaller, room will be a brand new venue for 2017. The Buxton Festival Fridge will be the smallest performance space and not one for claustrophobes - but it is bound to be a full-house!

The other new managed venue is The Rotunda - a 130-seat performance space on the Old Bowling Green in the Pavilion Gardens. The programme there is packed with top-quality drama, comedy and music.

These two venues are bound to attract big audiences but there is plenty to see and do at 40 spaces in Buxton and beyond - we have shows in Chelmorton, Eyam and New Mills too.

So, take a look at our programme on-line and start making plans. The printed programme will be available from the end of May and Buxton Opera House will begin selling tickets for many shows around the same time. Meanwhile, there is a Fringe taster on Saturday 22nd April. At 3pm at St Mary's Church the ever-popular Ordsall Acappella Singers will be helping celebrate the church's centenary. The singing will be fun and the home-made cake delicious.

Posted by Buxton Fringe at 18:02 No comments: 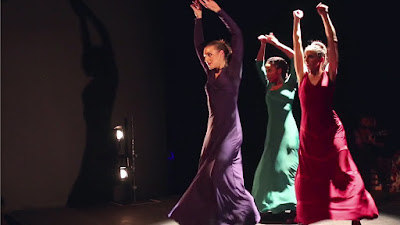