40 Days: countdown begins (and a competition is announced!) 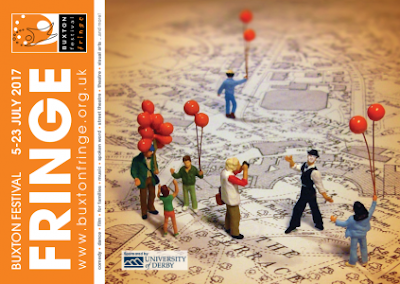 
Buxton Festival Fringe 2017 starts on Wednesday July 5th. Tickets for many shows are now on sale. Almost 40 shows have tickets on sale with Buxton Opera House.
Our exciting new venue Rotunda Theatre now has 15 shows on sale.
Ticketed events at The Green Man Gallery are on sale too.
Underground Venues will be at The Old Clubhouse and the Pavilion Arts Centre this year and tickets for their 70 events should go on sale next week.
So, all you need is a Fringe programme to choose what you are going to see at our biggest, most varied Festival ever. Printed programmes are now widely available in Buxton and will be distributed across the town and throughout the county over the next week.
We'll happily post one to you - though we'd appreciate a SAE, 1st class post for a programme is £1.30. Write to us at:
1 White Knowle Road
Buxton
Derbyshire
SK17 9NG.

With this year’s event just around the corner, Buxton Fringe is already thinking about 2018 and has announced an open-to-all art competition for next year’s programme cover.
The Fringe has had some terrific artwork featured on its programme covers including this year’s photograph from designer Tom Mason featuring tiny model figures against a vintage map background. Past covers have also been provided by art students from Fringe sponsor, the University of Derby.
We are now looking to widen the net with a competition aimed at professional and non-professional artists and designers alike and open to all. The closing deadline for submissions, which must be emailed, is October 1st and there will be a £100 prize for the winning entry.
Full details are available on the Fringe website. Fringe chair Keith Savage adds: “It's a few years since we have had an open competition for the Fringe artwork. Given the number of talented and imaginative artists and designers out there we look forward to having some difficult decisions to make.”


"The Boy Who Grew Wings" is a new show produced by Whispering Woods and is touring in England this summer.
We are thrilled that it can be seen in Buxton as part of our Festival Fringe on Saturday July 8th. There are two performances in the woods behind Poole's Cavern. This really is one for the family and promises to be like nothing else this Buxton Fringe.

Very different from the aerial acrobatics of "The Boy Who Grew Wings" is Mike Raffone's debut show at Buxton. This is what he has to tells us:

At the tender age of 52, and with almost three decades of experience performing interactive comedy in street theatre shows, Mike Raffone is moving indoors. He makes his Buxton Fringe comedy debut with Brain Rinse - Puppetry of the Audience.
Through a series of off the wall sketches Mike tackles all the big themes in life. Love, suicide, Beethoven and The Army to name but a few. But what makes this show different is that Mike doesn’t perform to the audience he performs with the audience in the ultimate immersive TV inspired sketch show with a cast of thousands. Sure, the idea of joining in may fill you with more dread than two hours in the dentist's chair with Dr Josef Mengele, but this still may be the show for you.
“I’m aware”, says Mike, “that asking the audience to do the entire show is a big ask, but it’s my experience that if the audience are treated with respect they will almost always give more than they imagine they ever could. The trick is making the audience feel safe to let loose a bit, and join in without feeling they are doing it badly. It’s also important to me that the audience decide for themselves just how much they are prepared to join in. In this respect they set the agenda for the show. When done with skill audience interaction can be hugely entertaining and great fun”
You can catch Brain Rinse, Puppetry of the Audience as part of The Buxton Fringe at United Reformed Church Blue Room, for four nights only from 20th to 23rd July at 8:15pm. Tickets are £8 (£7 concessions), email Mike at mike@mikeraffone.com for more details.

Here is an example of Mike's work to whet your appetite.

Our printed programme will be available in 3 weeks time. It will be a bumper 56-page, full-colour programme - to accommodate the 186 separate events we have for you this summer. Meanwhile the Fringe website gives full details of all the events to be listed in the programme.