After We Danced: Five Star Romance comes to Buxton 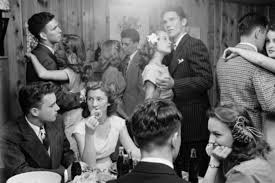 One of the shows at Underground Venues this coming Fringe is "After We Danced." Presented by NoLogoProductions the play is on from 12-14 July. Andy Moseley who wrote the piece took some time out to tell us something of the background to "After We Danced."

The play was inspired by two real events, the first was a couple in America, Helen and Kenneth Felumlee, who spent seventy years together, held hands every morning, never spent a night apart and died within 15 hours of each other in 2014 as Kenneth couldn't bear to live without his wife. Rather than write a play about a couple like that (because who wants a story where people are always happy!) we went with the idea of a couple who should have been together, but fate kept them apart. That brought us to the second event which is the Lynmouth Floods in 1952 that destroyed more than 100 buildings and killed 34 people in August of that year. The play is about a couple that met then, and how that event caused them to separate and not see each other again for sixty years.

I think of it as sweet and romantic but also tragic. Most of the 1952 scenes are sweet and romantic, you have a couple who are clearly meant to be together at the start of what should be a long and happy life with each other. The tragedy is that they end up spending so long apart. I made a conscious decision to give the play a happy ending and hopefully make it uplifting, which is why they are back together sixty years later. That their love has lasted is sweet and romantic, but also sad because of all the time they spent apart.

Setting the play in the immediate post-war past was almost coincidental rather than deliberate as the idea was to have a relationship that could span a lifetime which automatically meant that it would start somewhere around 1952, but that did make a big difference to their relationship. In 1952 the country was still living in the shadow of the war with the last parts of rationing yet to end, and a lot of the things that defined the 50s, and started to shape the world beyond it, yet to emerge.  It was a different world, and I liked what that meant when it came to writing the story. Had they met in the late 50s or 60s it would have been a less innocent time and maybe their relationship would have been very different and never have meant so much to either of them. The early 50s probably also adds to the sweet and romantic element of the play because of the innocence it adds to it.


If you want us to feature your Fringe show here contact us at: entries@buxtonfringe.org.uk