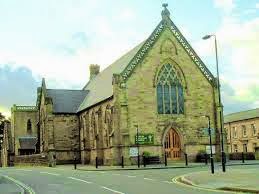 Over the course of the Buxton Festival Fringe (8-26 July) there will be more than 40 musical performances in 15 different venues – many of which can be heard in five of the town's churches.

St John's is a much sought-after venue – partly because of the splendid acoustic, partly because it can accommodate the largest ensemble. This year it hosts an intriguing variety of music-making including a joint Buxton Festival/Fringe show. Members of the Ukulele Orchestra play and sing with internationally-acclaimed lutenist Liz Kenny's Theatre of the Ayre for something of supergroup. Lutes & Ukes first joined forces in 2013; two years later they are back with a programme of songs from Shakespeare to Presley. (18 July).

Early music specialists Partita return for their 21st Fringe – this time with guests Stringboxes – with music ancient and modern; Baroque and Renaissance from Europe with some jazz and West African melodies for contrast. (17 July)

Rachel Johnson and Jemima Palfreyman won a Fringe Award for their piano and flute duets last year. They return and you have the chance to hear what so delighted the judges. This year's programme includes a musical ghost story and a sonata by César Franck. (21 July)

Music-making on a larger scale is offered by the High Peak Orchestra which plays Bruckner's Symphony No 6 and Rachmaninov's Paganini Variations for Piano and Orchestra. The soloist will be Ryan Drucker – a student at the Royal Northern College of Music. (12 July). The Peak District Music Centres have provided opportunities for young musicians for many years; the current ensembles are playing better than ever and the String Orchestra will be hot-footing from competition in Birmingham to play in the Fringe alongside the Wind Band. (10 July)

The Amaretti Chamber Orchestra has deservedly built-up a reputation for its playing across the north-west. This year we shall have the chance to hear two very different accounts of the Four Seasons; Vivaldi's and Piazolla's Four Seasons of Buenos Aires. (18 July)

Also at St John's is the Sheffield-based Albion Choir with a late-night programme of traditional British songs. The Choir has been on Radio 3, and events regularly sell-out; this performance includes the offer of a free pint of Abbeydale Brewery Albion Ale. (24 July) A feel-good show is promised by DaleDiva, an award-winning Derbyshire chorus that will be singing in competition in Las Vegas in October. Hear and see this show choir perform anything from the Hallelujah Chorus to God Only Knows. (25 July)

The United Reformed Church welcomes the Ordsall Acappella Singers who come the Buxton for the the fifth year. The Singers have developed a loyal following – partly for their enjoyable repertoire and partly for their home-made cake. Seconds will be available at a further performance at St Mary's. (25 July).

St Mary's has other musical treats on offer. Drum Tribe – a six-piece percussion group from South Africa play nine one-hour shows that are high in energy and give you the chance to join in. (8-16 July). South African singing from the Tshwane Gospel Choir will also be uplifting and provide an intriguing contrast to the British choirs in Buxton. (8-12 July). The other music event at St Mary's features solo cellist Melanie Dawn Jones. Melanie studied at Chethams and the RNCM and now teaches. She will be playing Bach and Gershwin amongst other music. (17 July).

Trinity Church is worth seeking out for the return of the Manchester Recorder Orchestra. If you want to know what 40 recorders sound like, here is your chance. The Orchestra will play Mendelssohn's Fingal's Cave as well as a tango based on a Dowland tune! (18 July)

The fifth Buxton church hosting music-making this Fringe is the Methodist Church – and what a packed-programme is on offer. For those wanting more opera the City of Manchester Opera will be singing some arias and choruses from Italian favourites. (25 July). Margaret Ferguson – a soprano with COMO – is back with her own solo recital; in a programme of song from lieder to musicals Margaret will be accompanied by pianist Jonathan Ellis. (17 July)

Jonathan plays a solo recital – including works by Mozart, Mussorgsky and Scriabin, who died in 1915. Jonathan is a passionate musician and has won Fringe Awards. (24 July). New to Buxton is pianist Emmanuel Vass; he has broadcast on national radio and is touring extensively this summer promoting his new album Sonic Waves. Luckily for us Buxton is part of his schedule. (13 July)

There will be an intimate account of Gerald Finzi's cantata Dies Natalis sung by tenor Tim Kennedy accompanied by pianist John Gough. Tim and John have delighted Buxton audiences in the past with the warmth and grace of their music. (18 July). Later that day the 40-strong voices of the Chapel-en-le-Frith Ladies Choir will fill the church. The Choir has a wide-ranging repertoire and for this show will be joined by Hindle Wakes, a Manchester-based folk trio. (18 July) The Bel Canto Community Choir – with guest tenor Terence Roberson – brings a mixture of traditional song, opera, cake and summer punch to the Church (19 July - afternoon).


Finally, two very different ensembles for your pleasure. The Sovereign Saxophone Octet return with a programme of arrangements for at least four different members of the saxophone family. The Octet draw on music written over the past 600 years to showcase the range and potential of the instrument. (19 July – evening). On a similar scale – but drawing on a different tonal palette - there will be an evening of mixed chamber music including Beethoven's ever popular Septet for violin, viola, cello, double bass, clarinet, bassoon and French horn. The performance is by the Cheshire Chamber Collective – all members of Cheshire Sinfonia. (16 July)