We had a 'bit of a do' on Sunday formally to launch the 2016 Fringe programme. 20,000 52-page full-colour programmes are now back from the printer and are being distributed throughout Derbyshire and across parts of the north-west.
As ever the programmes are free and feature a lovely design by artist Helen Mint. For the party we were lucky to have free entertainment from five 2016 Fringe performers. 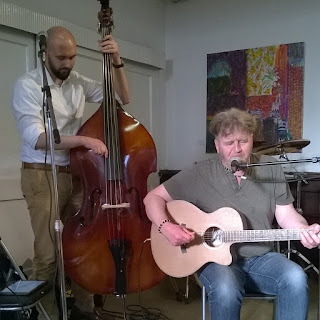 First off we had Egriega - who were travelling back from a wedding in Edinburgh. Theirs is a bluesy/jazzy sort of a sound and filled Green Man Gallery nicely. We look forward to hearing much more from them at Underground Venues on 7, 9 & 10 July. 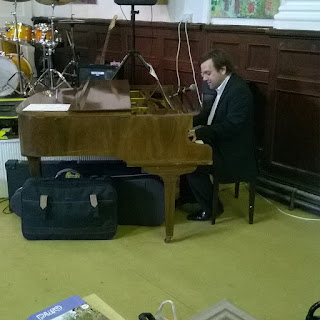 Next up we had Simon from Far West Theatre who some of us heard at the premiere of his Jacques Brel "A Life a Thousand Times" show last year. He has re-written the show and is back at the Green Man with performances on July 8, 13, 17, 23 & 24. 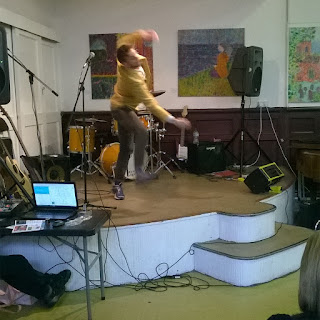 Lewys Holt made a bus trip from Leicester to join us (returning by rail to Nottingham) to do some telepathic dancing. His 'cool' dance show on the Fringe is called "Of, or at fairly low temperature" and you can see that at the Arts Centre Studio on July 16 & 17. Lewys is an engaging chap and his show is one to put in your diary.

Darren Poyzer was due to sing for us - but he had a breakdown on the way over and had a very long wait for the breakdown service and got home at about two in the morning. Sorry about that Darren - we look forward to seeing you soon. Happily for us Bluesman Mike Francis was in town and had a car full of guitars. He did a couple of numbers and will be doing his "Story of the Blues" show at the Old Clubhouse on 17 July. Pictures of Mike and an interview will be on the next blog.

Finally, we had Will Hawthorne and his Band (Matt, Nigel and Kenny - though sorry to say drummer Kenny can't be seen in this picture). 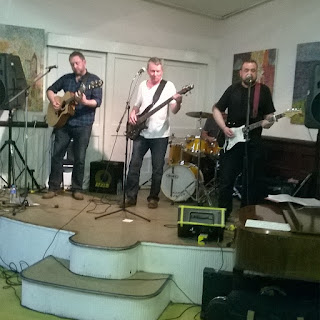 They treated us to six songs - including three from their Fringe show "Keep up with the Joneses" which you can hear at The Old Clubhouse on 18 July. The full show includes more than a dozen songs about Mr, Mrs or Ms Jones - including the Beatles, Rolling Stones and the Grateful Dead.

We had Charles on hand to manage the sound for all the musicians in a calm and unfussy way. Many thanks also to the volunteer staff of the Green Man Gallery for helping move furniture, keeping us all safe and being so welcoming.

So, the programme is well and truly 'launched' - all we have to do now is support the artists as well as we can.
Buxton Fringe