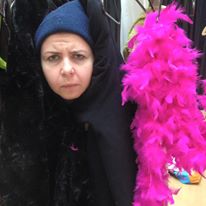 "Cloaks" is a new play by Alison Dunne. It is set in a theatre cloakroom where customers' coats become characters. It stars Lesley Emery and Charlotte Bond. Alison kindly agreed to answer our questions about her play and fishhouse theatre. You can see "Cloaks" at the Lee Wood Hotel on 7, 8 and 10 July.
"The coats in the cloakroom come to life to represent various characters in Kath's life, the donkey jacket is her first boyfriend in the 80's, Kev, while the parka is her sister, Marie. So each coat she interacts with is reminding her of someone in her past. Sometimes the coats are inhabited by Sam, who takes on the character and sometimes the coats are puppets almost, or even empty. So while the coats are not necessarily their owners they are a person suggested by the nature of the coat.
"Cloaks wasn't written with Lesley and Charlotte in mind. I wrote the play for an East Midlands competition and then developed it further with the advice and guidance of the Derby Theatre Writers Group. When Lesley, who had been to Buxton Fringe previously with her show What Would Sharron Davies Do? and had a brilliant time, approached me and Charlotte to see if we'd be interested in taking something to the Fringe this year it seemed as though all the stars aligned. I just happened to have a play right there that needed an older and a younger actor and so I sent it to them and they liked it. Having them in the roles has definitely deepened my understanding of the characters. We've done a lot of character development for the main characters, Kath and Sam but also the many roles Charlotte has to step into, including Kath's mum and dad. Accents have come with characters and Charlotte ranges across the country from Wales to a Cockney Ann Summers's party host.

"I'm hoping that the play will appeal to women of all ages but also to men. The play focuses on a relationship between an older and a younger woman, where each are missing things, fathers, lovers and crucially, parent child relationships. So I think anyone who has had a parent or a child might find something to engage them in the play. I'm not sure I can speculate about men might learn about women from watching the play but I'd very like to hear from them if they do learn something!
"fishhouse is a brand new theatre company. Whilst I have been writing for what feels like forever I was barrelled into the world of writing for stage by the 1448 Festival in Leicester in 2013 and as a result have become part of a thriving theatre community in the city and beyond. fishhouse was conceived in response to my own experiences and my feeling that I wanted to make work about women that was by women though not entirely for a female audience. I felt I wanted to represent women's experience on stage and in particular older women's experience as this seems underrepresented in the worlds I move in, full as they are of wonderful, vibrant and new work by young companies. We are not a young company in terms of our make up, although we are new.
"We ran a successful crowd funding campaign to raise funds for building our set as our company is as yet unfunded which was an experience and very heartening. In fact our generous funders gave us more than we asked for. None of us had been involved in crowd funding before, other than in giving donations and were very pleased with the results. It meant we were able to have our set built and then painted by the very lovely set designer Emma Jane Pegg. The whole experience has been collaborative for the company with everything from sourcing props to making badges and singing thank you songs for crowd funders being shared between us. We're very much looking forward to getting to Buxton Fringe, not only to perform but to get to see some other things too."