All over again for another year and it felt particularly poignant as we bid farewell to the Paupers Pit as a Fringe venue. We very much hope to see Underground Venues in a new home for 2017.

Thanks to those who have made it all work so seamlessly, from our sponsor the University of Derby to all our other other supporters, Fringe Friends, venues, reviewers and volunteers. Most of all, a big thank you to our Fringe entrants and enthusiastic audiences!

Every year I personally end up seeing or doing something extraordinary. Here are some special Fringe moments to cherish.

-         Waving our huge prize cup to appreciative crowds cheering us on at the Fringe carnival.
-         Writing a sex scene for the first time in my life and in five minutes flat at a FED writing workshop
-         Watching a child spontaneously produce the missing invisible hippo blanket In Dr Zeiffal, De Zeigal and the Hippo That Can Never Be Caught
-         Squirming on my husband’s behalf as he submitted to manhandling from the glorious Kagouls
-         Presenting the Spirit of the Fringe award to a gob-smacked Sam Slide
-         Realising what a beautiful place we live in at The Wild Peak exhibition
-         Choking back tears singing Jacob’s Distant Peaks song at our Kaleidoscope Choir performance
-         Crying over fake raspberry jam in War Stories
-     Realising that Jerry Sadowitz was not going to give the Fringe reviewer his notes back…
-     Feeling relief that dancer Lewys Holt was going to get his trousers back on...


Posted by Marketing Officer at 16:28 No comments: 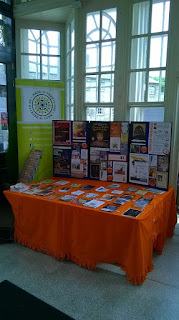 The 37th Buxton Festival Fringe begins on Wednesday, July 6th. Our Information Desk is all ready and our volunteers are on hand to help you plan to get the most from the 19-day Festival.  The Desk is in the Conservatory - adjacent to the Opera House and the starting point for the Discover Buxton tram tour of the town which leaves hourly. The Desk and the tram both open for business at 10.00 hours.

The team at Underground Venues is also working hard to be ready for a launch party on Tuesday night (5th) - join us from 8pm if you are in town. There will be plenty of free entertainment to get you in the mood. 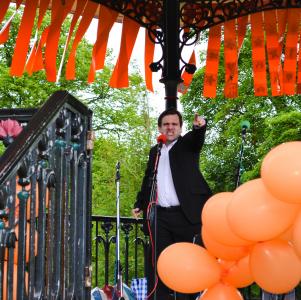 There wasn't space in the Fringe programme or on the website to give all the details of the Chelmorton Village Festival: so here are the latest details we have. Chelmorton is about 4 miles south of Buxton - take the A515 (Ashbourne Road) as far as the Brierlow Bar Bookstore and turn left and follow the signs.

The Brierlow Bar Bookstore is well worth a visit and is open seven days a week.

Meet the Experts - Free events at the Buxton Museum 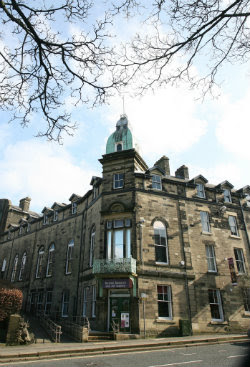 You'll want to visit the Museum anyway to see the excellent Derbyshire Open art exhibition so it makes sense to time your visit for a free lecture.

Darren Poyzer brings the third in his series of 'Human Condition' shows to Fringe 2016, and once again he looks forward to Buxton with an open mind and great enthusiasm ...

Darren, you must think of Buxton as a 'home game' now ...
Yes, I'm very confident in the format and the team at Underground Venues, and I've come to totally love the performance space in The Paupers Pit. Fringe time as a whole finds me wishing I was in Buxton every day from start to finish.

Tell us a little about 'Bloody Love Songs' ...
For those new to my gig, I take a theme and apply some 'outside the box' images and music that I hope encourages people to re-think one or two important aspects of life. There's nothing too scary going on though, I look throughout to entertain and create a reassuring feel good factor for those who come to my shows.

Are all the songs your own writing?I usually write these shows with allowances for unscripted moments and flow, so it's fair to say that every song will be either an original, or an original interpretation of a song people might already know.

Why the title 'Bloody Love Songs'?I wanted something a little edgy, to reassure people that this wasn't a stroll through cliche. Love can be painful and messy, and not everyone believes in it, even though it really is all around us. This was one of many potential titles, and it just happened to fit my mood on press deadline day!

Your two previous shows here were very well received and you have a 'Human Condition' theme. How many shows will there be?As life goes on there will always be a reason to write a new show, and as it happens these themes I hope are always relevant in the current day, in our hopes for the future, and in our historical research. When I came here with 'The War To End All Wars' in 2014, I was transformed by some of the research I undertook into World War 1 ... it's that epiphany moment I found then that I hope I can deliver with each new show.

It may be a little early, but if all goes well, is there a show theme for 2017?
Provisionally yes, the theme and title will be 'Home', and I intend to research what home means to different people in different places, and deliver songs that tell their stories. We'll see though, one step at a time ...

And finally, will you be visiting any other shows during Fringe 2016?Yes, I am scheduling visits to see Steve Roberts and Sam Slide for sure, and hopefully Jerry Sadowitz. I will likely take a punt on something different and unknown, and of course I'll be around for some 'Fringe @ 5' and 'Fringe Sunday' on the bandstand.

Thank you Darren, see you during Fringe 2016
Thank you too, it will all be fabulous for sure!