Out with the old, in with the new

Things being what they are the Fringe blogging team will probably fail to work out who is doing this and multiple messages wishing you a Happy New Year will be posted. But better two or three good wishes than none at all?
With the Fringe we don't expect many entries before January and then things pick up steadily. So thanks and congratulations to Tideswell Male Voice Choir for getting the ball that is Fringe 2014 rolling. The Choir has deservedly built up a huge and loyal following over the years and we can confidently predict a sell-out for their show in July.
If you can't wait until then there is much in the new Buxton Opera House programme that is Fringe-related. The Kaleidoscope Community Choir has its origins in Local Vocals which was established by Carol Bowns and performed at the Fringe on two occasions. Carol directs KCC which meets on Tuesdays (1-2pm in the Pavilion Arts Centre) and on Monday evenings (7-8pm) upstairs in the Old Clubhouse on the following dates:
Feb 10 & 18; March 4, 10 & 18; April 1 & 15; May 6, 12 & 20; June 3, 9 & 17; July 1 & 14. There is a promise of a Fringe Concert on July 15th!
Buxton Film runs an annual short film competition and screens the best entries during the Fringe. From March 25-30 it also screens, in collaboration with the Opera House, a Festival of World Cinema. 17 films, in 9 languages over 6 days in 2 venues. This year's programme includes at its core, films about the lives and experiences of children as well as recent box office successes such as Blue Jasmine, Le Week-end, Philomena and Sunshine on Leith.
Crimes Against Taste went down very well at Fringe 2013 and they are at the Arts Centre Studio on Friday February 14th at 7.30pm. A mix of song-cabaret-satire their new show is "Tales of Lust, Love and Heartbreak" a mixture of original songs and comedy classics this will be a memorable Valentine's Day!
Regular Fringe visitors are theatre companies Library Theatre, Cotton Grass Theatre and Black Box Theatre Company and all are at the Arts Centre Studio in March and April.
Library Theatre will be doing two of Alan Bennett's much-loved Talking Heads extended monologues. Cotton Grass is doing "The Unknown Land" written by Buxton playwright Caroline Small. A play for one actor and many characters it is a compelling tale of extreme survival with musical accompaniment by singer/accordionist Keith Kendrick.
Black Box have a history of innovative Shakespeare productions and it will be interesting to see their account of "Romeo and Juliet".
Fringe (and Buxton) favourite Matt Pritchard will be presenting his show "Extra Sensory Deception" at the Arts Centre on Sunday 1st June - an entertaining mixture of magic, comedy, deception and silliness suitable for all from 6 upwards.

Posted by Buxton Fringe at 13:54 No comments:

Shouting about the Fringe

My new role as marketing officer has thrown up a few dilemmas. Just how much do we want to shout about the Fringe – to the tune of 14, 18 or 20,000 Fringe flyers? Despite our meagre budget, can we pass up the chance to take an ad in the Tourist Board’s new Welcome Brochure with its massive print run of 150,000? Do we keep up with the big boys and renew our membership of BAFA (the British Arts Festivals Association)? The short answer to these questions, if you are interested, is 20,000, ‘No!’ and ‘Yes!’
In truth, as our logo might suggest, we are always involved in a juggling act to wring the most out of the money we have and to spread the word about the Fringe and the arts generally to as many people as possible at as low a cost as possible. So we have a hard-working Fringe press team and thankfully a very supportive local media – the Buxton Advertiser, Pure Buxton, Radio Derby, Artsbeat and more – who help us publicise everything we do for free! We also do a lot of work on the ground networking. Tonight for example I’m putting on some orange and representing the Fringe at the presentation evening for Buxton Community School, whose students regularly help us at the Fringe desk. For those of us on the Fringe committee it becomes second nature to tell people what we do and more importantly what our performers do.


And that’s where you come in really. Will you help tell people about our friendly festival and encourage them to put on a show, become a Fringe Friend or just come along and swell our audiences in July? With the panto season beginning (and I can’t wait to see Cinderella at the Buxton Opera House this weekend) ,  I guess we’re just encouraging our own kind of audience participation. That way we all get to have a ball!
Posted by Marketing Officer at 16:38 No comments: 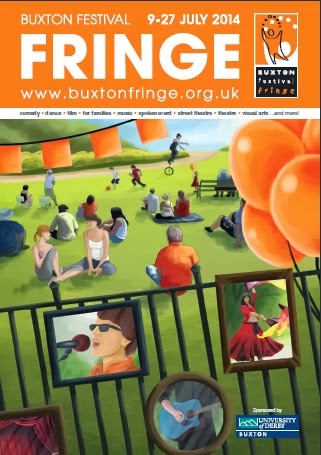 With Keith having taken up the reins, what's a former Fringe chair to do? Take up blogging of course. What to say is another matter but in my new role of Fringe marketing officer it is probably not inappropriate for me to announce that as of last night, the committee has approved our new cover for the 2014 programme (above), a lovely piece of art from Helen McIvor, chosen from a number of excellent designs produced by third year illustration students at the University of Derby. The printed programme does not come out till next June but you will see a cropped down version of Helen's design on our flyer which will be in tourist information centres by Easter. We think she has captured the Fringe's sense of fun, variety and inclusivity as well as some aspirational sunshine!

As you know we are now open for entries and are eagerly waiting for somebody to take the plunge and enjoy the kudos of being the first event up on the website. I may seem as wrapped up in the Fringe as ever but I have been playing hooky from a few committee meetings and indulging my interest in some of Buxton's arty goings on, from sketching burlesque dancers at a Dr Sketchy session at The Old Clubhouse to attending preview nights at The Green Man Gallery and tonight at the Jarva Gallery in Whaley Bridge where Rob Wilson will be unveiling his latest mixed media works. Way back in his career, Rob won the Fringe Artist award in 2006 and is decent enough to mention it in publicity. We certainly backed a winner!

The Fringe may be a way off but there is plenty to do in the town in the meantime. I'm involved in Sensational Salsa's dance classes at The Clubhouse on Tuesday nights and am part of the Kaleidoscope choir which will be having its Christmas showcase at The Octagon on Tuesday December 10, 1-2pm, with mince pies and mulled wine. Come along. It's only £3.50.

Our Fringe party at the Green Man on Sunday 1st is already seeming a while ago but we had a great time thanks to the swinging presence of Basin Street Jazz and Blues and a festive sing-along. So the Fringe has probably done Christmas now. Roll on summer!
Posted by Marketing Officer at 12:20 No comments:

A poem for Buxton

Buxton was recently shortlisted by the Academy of Urbanism for the Great Town Award 2014. The award went to the Irish city of Cork.
Buxton did get a poem from Ian McMillan though - Ian performs in Buxton regularly and was part of an award-winning Fringe event in 2011. Ian is welcome back any time he wants to come.

Stretch out in Buxton and you touch the sky,
Walk uphill in Buxton and you hear the sound
Of history dancing and learning to fly
And holding you close to the Derbyshire ground.
A stroll to the Opera House: an aria in itself,
A three-act-drama involving shopping and cake
In a town standing proud along a rocky shelf.
If you've a cultural, artistic or literal thirst to slake
Then this is the town on the North's solid roof
This is the town where it can snow in June
This is the town that is never aloof
This is the town that is always in tune.
An evening dress and a pair of thick socks on:
That's how you should dress for the nuance of Buxton!
Posted by Buxton Fringe at 18:06 No comments: