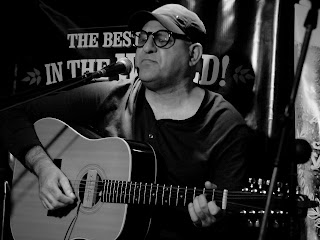 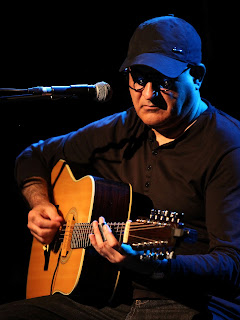 Mike Francis was a welcome guest at our launch party last weekend and he sang a couple of songs for us before he had to head off for a meeting. Mike also agreed to answer some questions for us.

1] You've been on the road for 40 years. What changes have you seen in that time - in terms of audiences, the music, gigs, other musicians?

A tough answer to condense but I’ll do my best. Much of the original blues influence in Europe had come via US forces bases established after World War II. Over the last 40 years travel, communication and media has shrunk the world and the scene has become much more international. Since 1990 even though the UK has gradually become host to the tribute band, in terms of spreading the message of the blues there has been a healthy evolution of dedicated events and festivals. Amongst the forest of trilby hats a whole new
generations are able to experience an exciting piece of cultural history. Digital media has taken the music industry from the cassette to the likes of YouTube, streaming and down-loading enabling an artist to reach the whole world with much greater ease. Indeed traditional music genres and artists have also benefitted from these developments.

The likes of google search has become king and in my own case actually caused an unexpected problem. In 2009 a singer of the same name passed away in Italy somewhat ironically massively boosting their google presence. By 2011 I took the risky decision to rebrand as Bluesman Mike Francis as it was causing a substantial problem when gigging in Europe. Although in some ways it meant starting again, in all honesty it has been a pretty amazing few years and luckily I haven’t looked back since.

2] How has your music, or your approach to it, changed?

Quite simply taking advantage of a situation following a comment made by Rolling Stone's author Martin Elliott. He identified a link with my contemporary material and traditional roots of people like the late Woody Guthrie and Robert Johnson. Essentially what I have done is taken that a stage further and put together the show Story of the Blues, which will be at Old Clubhouse Buxton twice on Sunday 17th July as part of the Festival. It has an element of education but is not by any means a science lesson, just fun. I’m really enjoying being all acoustic again and even playing bottleneck slide on 12 string guitar that I so loved doing in my early days. If I can inspire and interest a new audience then the job is done.

3] Which other musicians do you most admire? Are you conscious of borrowing from them?

Sounds a cliché but over the years there has been so many. I consider myself very lucky to have toured and played with some truly brilliant performers that have provided very special influences. Naturally I have learned an awful lot and hope to demonstrate a little of my own evolution on the 17th July. Other than that I don’t want to give too much away. That would be telling…

4] Want to tell us more about the European Blues Awards as an event?

Although there’s been many different music awards springing up over recent years, the European Blues Awards celebrate their 35th anniversary in 2016. In recognition of this they are featuring a number of showcase events throughout Europe to raise the profile of the organisation and blues music in general. The first one was in Holland during May and I believe they continue throughout this summer. As well as pianist Dale Storr who will be playing shows at Buxton the same weekend on Saturday 16th I was also nominated in the awards process during 2013 and am both delighted and honoured to be involved.

5] Can white men sing the blues? An old chestnut I know but...

That’s an easy one. Of course they can! OK in some countries of Europe the dialect can sometimes sound a little unusual, but that’s the beauty of the blues. It can be performed by anyone and is essentially a very simple form of expression. Even back in the day, blues music was not solely the exclusive domain of black performers (one of the myths that I attempt to explain and dispel during the Story of the Blues show). Despite the general belief at the time, 1970’s punk rock was not the first music genre that enabled absolutely everyone to express themselves and their emotions musically.

6] If Robert Johnson was alive today would he still be singing blues or would he find another way of giving expression to being poor and black?

Haha, a great question, I like that. If Robert Johnson was alive today he would certainly still be playing and singing the blues, most importantly on a good ole acoustic guitar. Despite the advent of technology, acoustic instruments are as popular as ever before. OK he’d probably be looping the odd riff but I suspect like me, he’d be singing about the likes of Donald Trump through the finest music genre in the world, telling the Story of the Blues.

Bluesman Mike Francis will be at The Old Clubhouse on Sunday 17th July. Tickets are available in advance from Buxton Opera House.

If you want to be interviewed for the Fringe Blog contact us at:
entries@buxtonfringe.org.uk