The Ugly Face of the Fringe 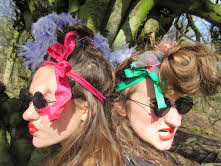 Buxton-based theatre trio Orange and Pip show there is no such thing as a fairytale ending in their latest production, Ugly, a dark new drama exploring what happens to the Ugly Sisters after Cinderella’s marriage to the Prince.

With Disney’s recent film of Cinderella taking a more traditional line on the classic fairytale, Orange and Pip have put a new spin on the story, offering something that’s angry, moving and decidedly Grimm.

Author Lilly Posnett, who has twice been nominated for a Fringe New Writing award and is studying English and Drama at Cambridge, explains: “I was keen to give the Ugly Sisters a voice for a change... The play is about learning the true meaning of beauty - learning to be free to be who you are.”

The actors are seasoned performers. Annie was nominated for Young Actor in the Fringe Awards in 2011, as well as performing in the production of Red Red Shoes ("a captivating actor" - Fringe Review) which won the award for Young Drama in 2013. Poppy has performed in many Buxton Fringe productions, including a version of Wyrd Sisters which was nominated for Best Young Drama. As well as writing numerous plays, Lilly has taken leading roles including Sandy in the Community School’s production of Grease.
Ugly looks set to build on the success of After Alice, offering accessible physical theatre, dance, poetry and music in one spell-binding show. "It’s so exciting to be bringing a new production to life this year, and it's fabulous to see our new theatre company going from strength to strength" says Annie. “The play is really thought-provoking, offering a fascinating, feminist perspective, questioning the whole idea of ‘happily-ever-after’.”

Orange and Pip’s Ugly will take place at Underground Venues, underneath Buxton’s Old Hall Hotel, on July 8th (7.15-8pm), then July 9th and 23rd (8.45-9.30pm). For more information and for bookings see orangeandpip.wix.com/orangeandpip

If you want us to share information about your show on the Fringe Blog send it to us and we'll use it.