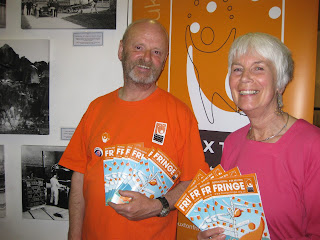 
Apparently the football season is over and the tennis season hasn't started yet. [That stuff on clay in Europe doesn't count; the greatest tournaments are played on grass by all accounts]. So we can concentrate 100% on the only annual event of significance to this Blog.

Rather more than half of our 18,000 52 page full-colour programmes have now been distributed throughout Derbyshire and the north-west. One or two have even been posted to (whisper) London. So what can we look forward to in Buxton between 8-26 July?

The seminal biopic of Jaques Brel, written by company member Simon Pennicott, incorporates his world famous songs, interspersed with his true words on the loves, lyrics and life of their famous creator. Une Vie a Mille Temps is a celebration, presented as a musical conversation between
Father and Daughter, set in cabaret style within the fabulous old ballroom that now houses the Gallery.  The first of its kind to be approved by éditions Jacques Brel, headed by his beloved daughter, France, this promises to leave its audience with renewed love for Belgium’s favourite son.

Born in 1929, Jacques became the most successful chansonnier of his generation, later influencing such artists as Rod McKuen, David Bowie and Scott Walker.  The show includes both well-known Brel classics and hidden gems, all set in cabaret style within the glorious surroundings of The Green Man Gallery.

Writer of the show, Simon Pennicott, says “For many years I have felt that people only remember Jacques Brel through songs other people have sung. The truth is that there is so much more to the man than you can glean from “Seasons in the Sun” or “If you Go Away”. The purpose of writing this was to try and reclaim Brel’s original songs and tell his story in a way that people can rediscover the genius he was”.

“It has been a project of mine for many years and includes several brand new translations of Brel’s work as well as many songs sung in the original French. The script has had to go through several changes and also the authorisation of the Brel Estate to get to the stage where we can present it at Buxton.  We are absolutely delighted to be premiering it here and we know people will love the show whether they are familiar with Brel or not”.

Anyone wanting further information regarding the show should  contact Simon Pennicott on 0783 3511980 or simon.pennicott@gmail.com.