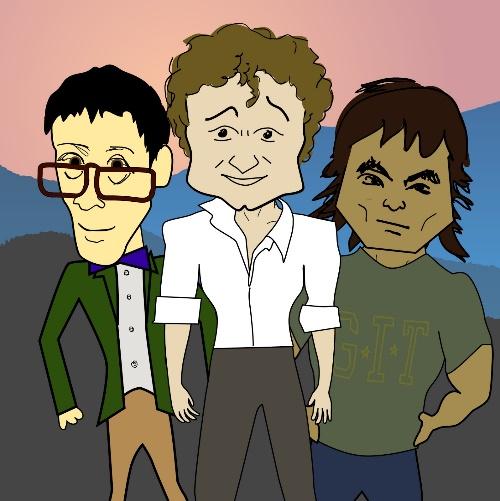 Following 16 years of productions on the Buxton Fringe, award-winning theatre company Three’s Company are offering a new comedy podcast for this year’s mainly online coronavirus-proof Buxton Fringe (1-19 July).
The Buxton-born theatre company – Yaz Al-Shaater, Tom Crawshaw and Michael Grady-Hall – first appeared on the Buxton Fringe in 2003. Subsequent years have seen them perform all over the country, including a run at the West End, but have returned to Buxton each summer to produce new work. With the 2020 Buxton Fringe going online, their offering this year is an epic new genre-busting radio comedy in five parts.

They are joined in their online adventures by a host of top actors from previous projects, including some very special guest stars. Listen out for Les Dennis as a bungling wizard, Rufus Hound as a bankrupt space-ranger, Youssef Kerkour as an acerbic butler, and Caroline Quentin as an evil scientist who risks destroying the world.

Three’s Company’s Adventure Department follows the trio’s attempts to record a serious theatre podcast, which is unfortunately interrupted each episode by an urgent adventure. Series 1 sees them rescuing an island from a wicked witch, saving the Queen from aliens, solving a murder mystery, and taking down a film noir crime boss – all before attempting to stop a zombie apocalypse in the dramatic season finale.

The laugh-a-minute comedy premieres online on 3 July as part of the Buxton Fringe, with the first two episodes available to download from 7:00pm that evening. Subsequent episodes then follow each fortnight – all completely free.

All episodes can be found at threescompany.uk/adventure so be sure to subscribe and join the adventure!