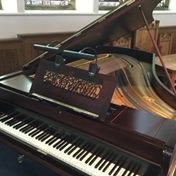 At the end of Buxton Fringe 2017 the Broadwood grand piano from the United Reformed Church went off to Shacklefords in Macclesfield for a total overhaul. It was back in time for 2018's Festival. The piano is now in regular use and is being played at a number of events in Fringe40.

First off is Brian Low - a student from the Royal Northern College of Music. On 4th July Brian plays a programme that includes music by Bach, Takemitsu, Ravel and Liszt.

On Sunday, 7th July Eden Walker returns. Another young pianist, Eden was an award-winner last year and he will be playing Bach, Mozart, Scriabin, Busoni and Čiurlionis.

The following Sunday (14th) we have the Ryeland Trio. Jonathan Ellis plays piano along with Duncan Reid (violin) and Isabel Williamson (cello) in a programme featuring music by Beethoven and Fauré.

Jill Crossland has played on the URC Broadwood twice and for her third visit (Sunday 21st) she is playing Bach, Debussy and Brahms. Her recordings of Bach have earned critical acclaim and we are lucky to have her back.

Something quite different (we imagine!) is Charles Ormrod's show "4Khz is a Chilli." We do know that Charles is something of a whizz in jazz styles. You have three opportunities to find out what exactly Charles means - he plays on 5th, 12th and 17th July.

On 16 August 1819, in St Peter's Field, Manchester, tens of thousands gathered to protest against the injustice of a parliamentary democracy which saw whole towns unrepresented by an MP. Cavalry were summoned to disperse the crowd. Possibly drunk, certainly ill-disciplined, the cavalry drew swords and cut down unarmed protesters leaving hundreds injured and dead. What became known as the Peterloo Massacre is being remembered across the north-west as the 200th anniversary approaches. Local readers will use Shelley's The Masque of Anarchy - written in the immediate aftermath - as the centrepiece for a commemorative event at The Green Man Gallery on July 20th.


In unvanquishable number!
Shake your chains to earth like dew
Which in sleep had fallen on you:
Ye are many—they are few!"