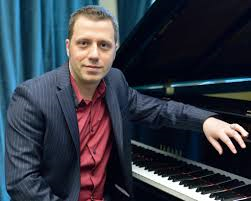 One of the joys of Festivals like the Fringe is that so many venues in the town join in the fun. Among this year's treats is the return of New Orleans piano virtuoso Dale Storr - who is paying at the excellent Hydro Restaurant on Saturday 8th July from 8pm.

Dale has many friends in Buxton already, and makes more with every visit. Later this year he is playing at the Great British Rhythm and Blues Festival which writes this about Dale:

"Dale Storr's musical journey has taken him from his rural Lincolnshire upbringing to his own musical mecca, New Orleans. Dale's early musical interests were inspired by his parents' record collection of early rock'n'roll and country music. His interest grew deeper when he began playing the piano at the age of six, cocking an ear to the piano-based music of Little Richard, Jerry Lee Lewis and Fats Domino. The slip-note piano of stylist Floyd Cramer was also another influence that had entered Dale's musical sub-consciousness. As a young boy, his emerging talent led to him winning numerous school and county music competitions as a solo instrumentalist. He also started performing live in local venues at the age of ten, playing organ.

Dale's ambition has always been to play the music of New Orleans, which can be anything from a classically influenced minuet, a latin rhumba, a back o' town junker blues to a frenzied boogie woogie. As seen with every Dale Storr performance, he's certainly fulfilling that ambition.'

He has continuously toured the UK as far and wide as Penzance to the Shetland Islands, whilst also taking in much of mainland Europe winning over a legion of fans overwhelmed by his mastery of New Orleans Piano. He has reached the finals of the British Blues Awards seven years in succession and also won the 2015 best musical performance award at the Buxton Fringe Festival."