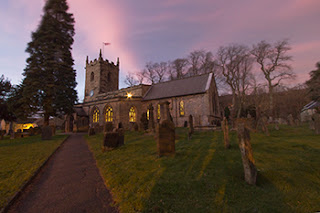 We've been open for entries to Buxton Fringe 2017 for 3 months and we close in less than 7 weeks - so it stands to reason that a significant number of shows have been booked in. By the end of February we had over 70 different events confirmed - a record for that date. Our best guess is that about half of this summer's Fringe is in the calendar. And it is looking like an outstanding Festival already!

On this blog we try to give some coverage to every event - and if you have news or background to any of this year's shows do let us know and we'll share it as widely as we can. It makes no sense to try and run through 70+ events in one go - so for now here is news of some of the acts and venues new to Buxton Festival Fringe.

The village of Eyam has hosted Fringe events in the past - memorably a promenade production of a play about how the plague infected the village in the 17th century. It is a beautiful and evocative place to spend some time in. We are delighted, therefore, to see that on 16th July (3-5pm) the Eisenach Ensemble will be at Eyam Parish Church performing vocal duets and solos by Monteverdi, Handel, Bach and Telemann including Zefiro Torno, Sheep may safely graze and Handel's Italian duets.

The Fringe also extends as far north as the handsome town of New Mills. The Spring Bank Arts Centre (15th, 7.30-9.00) is hosting a show CUPID AND THE KING: THE KINGS' COURTESANS. You ought to read the small print: “Cupid and the King” explores the lusty, rancid world of English kings and their “mistresses” with period readings and music from the Tudors and Stuarts. From the gay lovers of James I to the people’s mistress, Nell Gwynne; be prepared for bawdy, no holds barred, language and adult content. New Mills can take it - but can you?

Another one-off event that demands your urgent consideration is "The Boy Who Grew Wings" (8th, 6-9pm). This is happening in the Grinlow plantation behind Poole's Cavern and is a piece of woodland circus theatre - including aerial acrobatics and music. Whispering Woods are producing the show and it could be the only place to be after the town's carnival.

We have been waiting for confirmation of a new Fringe venue and just this week it was announced that The Rotunda - a circular marquee on the Old Bowling Green in the Pavilion Gardens - will be home to shows throughout the Fringe. Seven events have been announced already with more to come. The initial programme has a strong mix of drama and comedy with a focus on gripping stories about people you can care for. "Call Mr Robeson" tells of the life of the actor and singer who was also an important civil rights activist.

"Gratiano" is described as a sequel to "The Merchant of Venice" and explores the politics and prejudice and hate in Mussolini's Italy to more recent days. Given the political turn in western society and politics of the past 12 months this will surely be resonant here and now?

Richard Pulsford has been finalist in the UK pun championships more than once. We ought to try and find something clever to say there - but let's leave it to the experts. Try and keep up with Richard on the 9th & 12th.

We want to tell you about picnics and benefit gigs, and shows at the Palace Hotel. And we shall tell you - but next week!