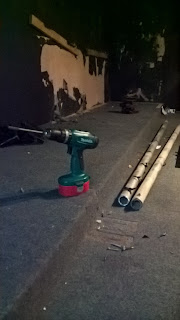 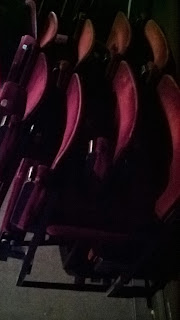 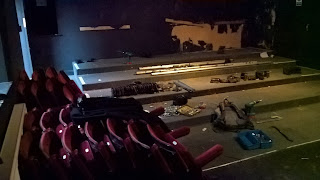 We've spent the last couple of days dismantling the Pauper's Pit theatre in readiness for the arrival of the team which is working on the Buxton Crescent Spa Hotel redevelopment. For those that doubted the day would ever come here is some photographic evidence. Recent events suggest that photos can be interpreted in all sorts of truthful ways and some may say this is evidence that a really great theatre is being constructed.

We hope to recycle all the equipment and open a new theatre/cinema somewhere in town - but it will never replace the atmosphere that the Pauper's Pit had. Thousands of shows were presented in the Pit - comedy, theatre, dance, magic, film, music. We laughed, we cried, we shouted and were stilled.

You can hear an interview on High Peak Radio which touches on the Pit and its successor venue - The Old Clubhouse. While it is tempting to look back, we are at the stage where Fringe 2017 is barely five months away and we must press on.

Already we have over 20 shows and events lined up for July. At this stage 'Music' is the biggest category and some exciting shows have been added in the past few days. Our collaboration with the Buxton Festival has already produced one exciting show. The Dodo Street Band play on Tuesday July 11th as a Festival/Fringe showcase. The DSB will bring an exciting mix of European and British folk tunes played with energy, passion and great delicacy (when required!) They also have some smart hats - check out the video link.

A little more restrained, we suppose, will be Annette Gregory with her tribute to Ella Fitzgerald at The Green Man Gallery on July 7th. Also on the 7th (and the 8th) Close Harmony Classics will be singing at Scrivener's Bookshop, the Cheshire Cheese and the Green Man Gallery - so no excuse for missing them. They'll be singing four-part harmony versions of 'Hello Dolly' and 'Coney Island Baby' among other things.

Plenty to look forward to already with another 120 or so events still to come!