The Fringe's History of the 20th Century 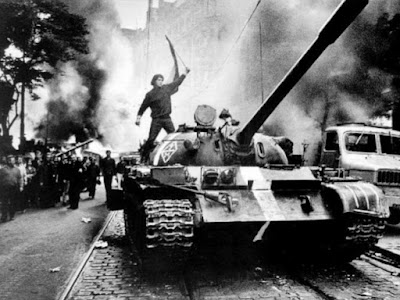 Now we aren't going to pretend that this is comprehensive - and much of the globe isn't included but there is a partial history of events and cultural landmarks to be found at this year's Fringe.

Comedian Abi Roberts (22nd & 23rd) lived in Russia in the 1990s. Now we can't guarantee that she will provide a detailed analysis of the break-up of the Soviet Union and how Gorbachev's seemingly liberal approach resulted in the grim spectacle of Putin - but sometimes laughter is the only sensible option. Another comedian hoping to inform us on East-West relationships is Nick Hall (9th). His show - "Szgrabble" - is a one-man Cold War thriller.

Parochial - and we don't mean this as a term of abuse - is Buxton Film's programme of archive film (16th). The Media Archive for Central England holds hours and hours of film and a 45-minute selection showing aspects of life in and around Buxton between 1901-1974 will be screened. Some of this will not have been seen publicly for many, many years if at all.

Jazz and Blues may be the most important art form to emerge in the 20th century and a whole bunch of musicians will be on hand to play some for you. Dale Storr (16th) is an excellent pianist in the New Orleans tradition. He has a new album out and will be playing two, two-hours sets previewing the album.

Basin Street Jazz & Blues (10th & 20th) will sing and play a strong set of standards (and some original numbers) that will help display the breadth and variety of the music. If BSJ&B are 'coolish' then the Herding Catz Blues Band (16th & 22nd) are at the other end of the scale - a cracking electric blues band, fun to listen to. More, authoritative Blues will come from Mike Francis (17th) who has been touring for 40 years and is in Buxton as part of the European Blues Awards showcase weekend. All of these gigs are at the Old Clubhouse - opposite the Opera House.

Among women singers of jazz and blues few are more eminent than Bessie Smith, Billie Holiday and Nina Simone. Annette Reis (6th, 17th & 20th) will be drawing on their legacies and repertoire. She will be accompanied by Will Hawthorne (18th) whose band is presenting a collection of songs from the 20th century unified by their subject matter - all feature Mr or Ms Jones.

We have more on the subject of the Cold War from Stephen Roberts (10th & 17th) who will be talking about Le Carre, the Cambridge Spies as well as singing some of his songs on the subject. The theatre company Rusted Dust bring a new play to Buxton. "The Communist Threat" (7th, 8th & 15th) is set in Vienna in 1950 where two agents await orders to execute a communist traitor.

Shostakovich 'enjoyed' a difficult relationship with his political masters. In Leningrad in 1941 as the city is under siege he struggles to write his seventh symphony. "The Conductor" (20th, 22nd-24th) is based on the gripping novel by Sarah Quigley.

The figure of Adolf Hitler looms over European 20th-century history and Patricia Hartshorne in a new play "In the Fuehrer's Face" (19th-22nd) mixes the surreal, comic, the poignant and the dark as she reflects on that grim period.

Vera Brittain lived and worked in Buxton for a short while. Famously she didn't much care for the town but the experience was influential. In 1915 she completed VAD nurse training at the Devonshire Royal Hospital. Hear the story of her work with soldiers returning from the Front (13th). Not so very far away - geographically - but very different politically lived Rosa Luxemburg, one of the few heroines of the political Left. Her story is told by poet Jim MacCool (6th).

Aulos Productions are always welcome Fringe visitors and their work is always intelligent, thoughtful and good. "Lest We Forget" (14th, 15th & 17th) is a new play about a family that struggles to make sense of memories of their son and the truth of events in the trenches of the Somme. More new drama set in the First World War comes from Breathe Out Theatre. "War Stories" (7th, 12th & 21st) brings together Australian nurse Elsie and Manchester soldier Bernard.